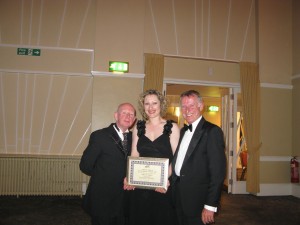 Every year the International Dance Teachers Association offers an award to its newly qualified teachers, The John Dilworth Award Scholarship. In 2010, student teachers from across the world who took their teaching qualification were only nominated for The John Dilworth Award Scholarship if firstly they attain the highest grade and secondly if the examiner feels that the candidate has demonstrated ‘Special abilities and potential’. 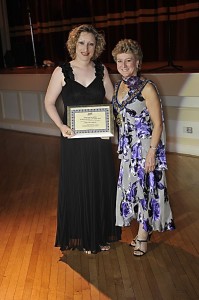 Out of 558 candidates from across the world in 2010, Miranda was nominated for the award along with 22 others, of which she won.

The John Dilworth Award Scholarship is highly prestigious within the dance industry and being nominated alone is an honour.

Miranda received her award during the annual IDTA Congress held

in Southport in July 2011. Following receiving the award she has been featured in The South Wales Echo, The Barry Gem as well as The Mansfield Chad which is a newspaper from her home town in Nottinghamshire.  She has also received congratulations and recognition from Alun Cairns MP as well as congratulations from IDTA colleagues far and wide. It is a once in a lifetime achievement and arguably the highest achievement for a dance teacher at this level. 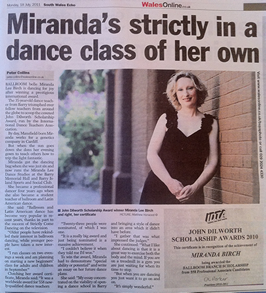 The 35-year-old dance teacher from Barry triumphed over fellow teachers from around the globe to scoop the coveted John Dilworth Scholarship Award, run by the International Dance Teachers Association.